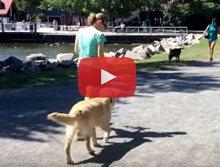 My husband and I adopted a young dog and experienced puppy behavior for the first time so we called Janet for much needed help. Janet designed a behavior and training program that motivated Pete to continually practice good manners in all circumstances.

The latest addition to our home, Annie, is an interesting blend of significant fear aggression and hard-headedness. Janet once again came to train Annie, my husband and myself, providing just the right program for everyone’s needs.

I cannot do justice to Janet's skills and abilities in a short paragraph; she has literally come to our rescue on numerous occasions, always upbeat in her approach to the problem at hand.

Tips for Dealing with Aggression

A dog who is trying to scare or harm a person, dog or other animal through his actions is displaying aggression. Indications of aggression can range from very subtle, such as glaring, to extremely clear, such as growling, snarling or baring teeth. 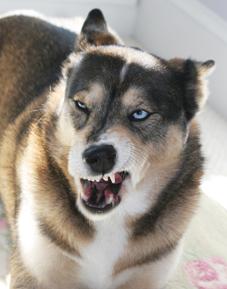 Owning a puppy or dog who is displaying signs of aggression is stressful and confusing. These dogs are wonderful, loving members of the family until a specific circumstance provokes the aggression. Often the family feels as if they are living with two different dogs. Circumstances which commonly cause puppies or dogs to display aggression include getting too near the dog's food bowl, trying to take an item away from the dog, touching one of the dog’s body parts such as her feet or mouth, a stranger approaching the dog or the presence of another dog.

Aggression can occur regardless of breed. Even a dog of a breed that is considered to be wonderful with children can be aggressive. Aggression can be inherited, therefore when selecting a puppy make sure that you meet both of the parents and that they are friendly. Aggression can be caused by a traumatic event in a puppy or dog’s life such as being hurt or scared. Aggression can also be caused by lack of exposure to a situation. Puppies who were not adequately socialized can grow into adult dogs who are aggressive towards strangers, and puppies who did not have their feet or mouths handled when they were little can grow into dogs who become aggressive when someone tries to touch these areas.

Aggressive behavior usually becomes worse with age, so that the young puppy who growled softly in a certain situation becomes the adolescent dog who growls loudly and snaps in the same situation, who in turn becomes the adult dog who snarls and tries to seriously bite. It is therefore important to begin working with your dog or puppy as soon as you notice any signs of aggression.